What characteristics define the Action/Adventure movie? Visit the “Film Genres” page on the American Movie Classics (AMC) web site to find out! 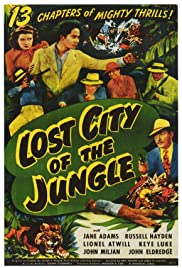 The Universal Studios serial "Lost City of the Jungle," produced in 1946, involves a race between good guys and bad guys to discover an element that will stop the atomic bomb -- a fictional story about a very real concern for audiences who had just lived through World War II. Actor Lionel Atwill, who played the evil mastermind, died before filming of the series could be completed, so scripts for later episodes had to be rewritten to create a new character to replace him. Atwill may be best remembered for his role as the constable in Son of Frankenstein, which was later spoofed in Young Frankenstein. To see all 13 installments of Lost City of the Jungle, go to the Films on Demand database!

ioneer in Black cinema, died September 21. He is credited with launching the so-called Blaxploitation genre, which featured African American heroes (and anti-heroes) in gritty urban storylines -- for example, his third independent film, Sweet Sweetback's Baadasssss Song. But Van Peebles' talent would not be boxed in by Hollywood; he also wrote and produced Broadway musicals, published novels in French and English, and performed spoken-word albums that many consider to be an early predecessor of rap music. Although the Blaxploitation era was brief and drew criticism from within the African American community, its directors had a considerable influence on contemporary Black filmmakers like Spike Lee, Barry Jenkins, and John Singleton.