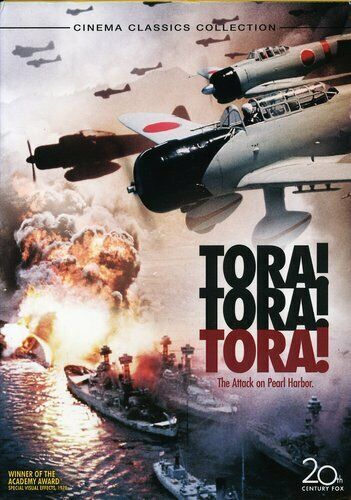 There was a time when male actors hoping to break into movies had to prove their skills by appearing in three genres: Westerns, police/detective stories, and war films. All three gave them the chance to portray the courageous hero, the despicable villain, or the comic relief -- or, if they were lucky, the dashing romantic lead who gets the girl. War movies, in particular, employed many up-and-coming actors, because they required large casts of men who were the right age to play the typical soldier, sailor, or pilot.

During World War II, Hollywood studios contributed to the war effort by producing military training films. For public consumption, they churned out public service announcements and dramas designed to boost morale, encourage audiences to buy war bonds, and influence public opinion -- commonly called propaganda. Many feature films combined fictionalized accounts of battles with footage captured by actual combat photographers, to infuse a sense of realism into the story. Even cartoonists got involved, sending characters like Bugs Bunny and Daffy Duck to outwit the buffoonish Axis powers.

As the Vietnam War began -- and then dragged on -- Americans were embroiled in unprecedented social upheaval, from the Civil Rights movement to Women's Liberation and gay rights, to the age-old conflicts attributed to the generation gap. Anti-war sentiment spread from fringe groups like beatniks, hippies and yippies to the general public, as the evening news broadcast the horrors of war into every household. Some filmmakers stopped acting as cheerleaders for war; movies explored more nuanced, complex characters who wrestled with the moral dilemmas of killing the enemy while serving a country that no longer embraced them.

For more insight into the war movie genre, take a look at these fascinating programs.